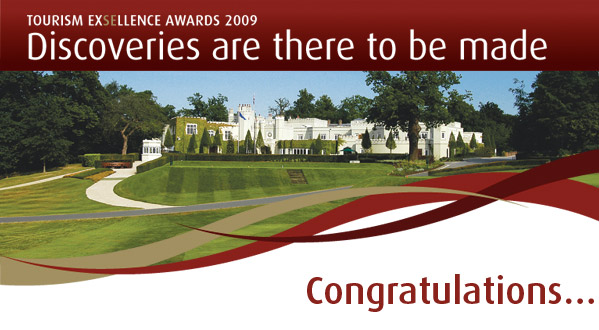 This is Wentworth Golf Club in Surrey, one of the most exclusive golf & fitness centres in the UK. This was the Venue for the Tourism South East ExSEllence Awards 2009. Dress was very formal, black suit and bow tie !. Drinks at 6:30pm and a sumptuous dinner at 7:30pm. There were over 500 people at the event, travel industry experts, journalists, media outlets and of course the few nervous ones who had been shortlisted for the awards. The awards presentation started at about 10pm (I had to have a short walk outside beforehand to calm down a bit, I was sooooooo nervous !)

Gyles Brandreth hosted the night and the winners were announced by category. It soon came then to the SELF CATERING HOLIDAY OF THE YEAR CATEGORY and the winners were announced in reverse order. (agony or wot !) The Highly Commended Winner went to receive their certificate and then a sudden silence. This was the big one ! Obviously as soon as the Silver Award winner was announced everyone could work out the Gold winner !  The Silver Award was….. not Coldharbour Cottage and then everyone round the table gasped and said you have won the Gold Award ! I couldn’t believe it, the second time in 3 years, it was fantastic. Then the floodlights came on and I couldn’t see a thing ! When the Gold Winner is announced there is a 3 minute video clip of the property so everyone was looking at that as I stumbled my way to the stage to receive the plaque and certificate.  As soon as I was finished on stage I was rushed into the media room to do radio interviews.

I needed a drink after all that.